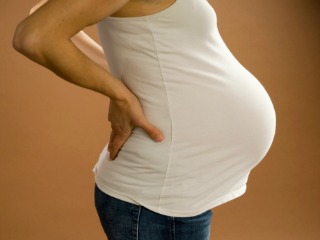 Pregnancy can certainly be a joyous time. Yet, for more than half of pregnant women, back pain can be a significant discomfort due to hormonal changes and the tremendous burden placed on the spine and pelvis by a growing baby. In some cases, pregnancy-related back pain can be debilitating – interfering with everyday life.

Expectant women dealing with back pain certainly have a lot to consider when it comes to treatment options. Some simply suffer through the pain. Others choose to take over-the-counter painkillers which can be risky. However, one alternative, which is growing in popularity with pregnant women because of its effectiveness and safety, is chiropractic care.

The Causes of Back Pain during Pregnancy

During pregnancy, a growing baby along with the increasing weight of the uterus, placenta, and amniotic fluid shifts a woman’s center of gravity forward to the front of her pelvis. This puts pressure on the lower back which can result in significant lower back pain.

Pain can intensify during the third trimester from the baby’s head pressing on nerves and from a spike in the hormone relaxin which causes the body to relax the pelvic joints in preparation for delivery.

Why Painkillers Aren’t the Answer

Many healthcare providers prescribe non-steroidal anti-inflammatory drugs (NSAIDs), such as ibuprofen, to relieve back pain during pregnancy. However, there have been recent studies that indicate the possible effects of these drugs on fetal development.

In one such study, researchers found there to be a connection between analgesic use during pregnancy and un-descended testicles in infant boys. This also supports findings from animal trials that indicated that NSAIDs can impair hormones needed for fetuses to develop male sex traits.

For pregnant women with back pain who become reliant on painkillers, additional risks include gastrointestinal complications and liver toxicity.

Instead of recommending pain medication to numb pain during pregnancy, chiropractors espouse a drug-free approach to relieving pain that leverages the body’s natural ability to heal itself.

Because back pain is rooted in misalignments of the vertebrae, gentle maneuvers that put the spine back in alignment can be used to relieve pain. For pregnant women, these vertebral misalignments (also called subluxations) can be even more pronounced. Thus, chiropractic care is both a safe and effective therapy for expectant mothers. In one study on the effectiveness of chiropractic to relieve pregnancy-related back pain, 16 of 17 patients found significant improvement after an average of two sessions with a chiropractor.

Beyond helping to relieve back pain, chiropractic may also help in a variety of ways throughout every stage of pregnancy. For example, chronic headaches, which are very common during pregnancy due to both hormonal changes and physical/emotional stress, can oftentimes be effectively treated with chiropractic care. And, chiropractic adjustments during pregnancy may also make both labor and delivery more comfortable and less painful.

A Chiropractic Technique for Breech Babies

For moms-to-be with babies not turned in a head-down position by the eighth month, a specific chiropractic technique may be especially beneficial. Breech presentation (the baby positioned with either feet or buttocks toward the birth canal) occurs in about one in 25 pregnancies and often prompts healthcare providers to recommend a Caesarean section.

Many chiropractors are trained in the Webster Technique, which is a safe and simple adjustment that balances the alignment of pelvic bones and associated muscles and ligaments. Unlike other methods for correcting a breech presentation, the Webster technique does not involve moving the baby. Rather, it makes it easier for the baby to move itself by reducing strain on the uterus from a mother’s musculoskeletal system. A survey of chiropractors who perform the Webster technique showed that they are successfully able to correct a breech presentation over 80 percent of the time.

Dr. McKinley has been committed to serving families in the Chicago area for the past 16 years. His mission is to empower as many people as possible to experience their optimal health potential through genuine care and education.

Dr. Matthew Ray has been committed to serving families in the Chicago area for the past 6 years. Born and raised in South Africa, he has been brought up with a chiropractic lifestyle due to the fact his father is a Chiropractor and went to the same School as he did (Palmer College of Chiropractic).

If your new born has colic we can help reduce the discomfort. You should not have to deal with colic problems alone.

Are your infant or child having problems with constipation? Let us help relieve them and get them back on a regular routine

Ear infections in babies and children can be frustrating and overwhelming. Let us help you provide your child a healthier, infection free life style.

Are you having problems with your infant or child’s sleeping pattern? Sleep is very important for growth. We can help them sleep better and strengthen their immune.

Attention disorder is common, but not incurable. We can assist in approving your child’s attention helping them keep up with their class mates.

We don’t want to see your child suffer from breathing problems. Asthma too, is curable. We can help your child with their breathing and stamina.

Bed wetting is frustrating and embarrassing, especially for your child. Let us help put a stop to it and give your child more confidence.

Have your child or infant been in an accident recently or have any physical disabilities. We specialize in rehabilitating adolescences with any kind of disability or injury.

Let Us Help You!

Let us help you today.
CALL or TEXT us at:

or schedule an appointment now: