Its not You. Its Me. (tears guaranteed).

Its not You. Its Me. (tears guaranteed).

I have been in practice for 17 years and I am very passionate about my work. So much so, that I have to be reminded from time to time that I must have “regular people” conversations if I don’t want to be officially labeled as INSANE. Everyone knows I am a quack and my family […] 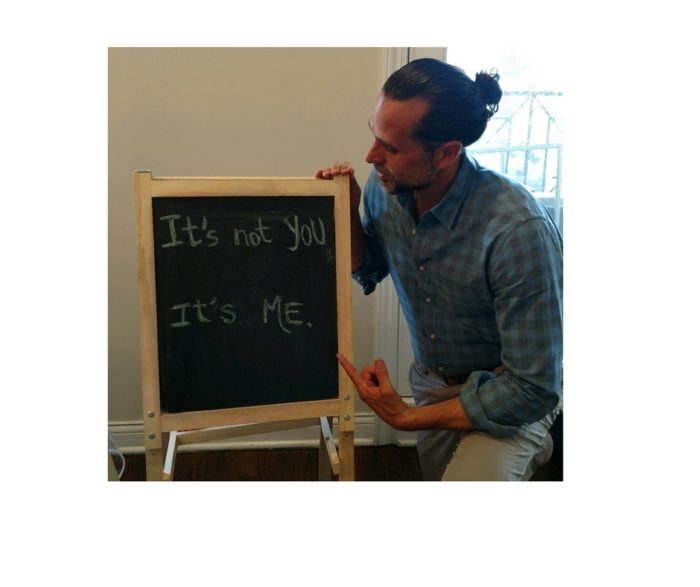 I have been in practice for 17 years and I am very passionate about my work. So much so, that I have to be reminded from time to time that I must have “regular people” conversations if I don’t want to be officially labeled as INSANE. Everyone knows I am a quack and my family does “quackery” things. But to be officially insane…that’s a complete different ballgame! So when I drop my kids off at school, i|I do make the attempt to talk to other parents about the weather, or the chicks from the science experiment that accidentally got overheated and never made it to chick land, or the hairdo of numerous people (from my man bun to the presidents hairstyle). And I promise you, it was not me. It was him. This dad brought it up as we were speaking about the weather…And how he always sees me in great shape, with awesome energy, and how he wishes he could go back to running. I couldn’t help it people! The conversation took the inevitable turn. “Oh, so you say you can’t run eh?”.

Fast forward and It’s a week later, and Mr. P. is a patient at my office for the classic middle age “back pain”. Bread and butter for any chiropractor, wouldn’t you think?

So now Mr. P  is coming in to “get fixed” (as he calls it), and asks me why i was treating a five year old girl. Then goes on : “their back packs are pretty heavy these days, I can see why she would have back pain too”. To his surprise (and probably yours too), she actually started coming as a patient when she was 2 years old after she was diagnosed as being “on the spectrum”. That meant that she had this “label” of autism, and severe developmental delays in motor function and no speech whatsoever. Her parents searched and evaluated many options and were confident that Chiropractic would help (and it saved her, but this is another story for a different blog post).  I provided Mr. P with his first adjustment and went on to continue with my very busy afternoon shift. I am informed by my office manager that I have an URGENT consultation, a “walk-in” (which we normally don’t accept, and we were booked solid that afternoon). But you see, our staff is on this mission. And when they beg, I listen.

I sit in my new patient consultation room. And I see Mr. P sobbing. I mean balling his eyes out. I thought the pain was getting to him. He tells me he is actually doing better physically. But goes on: “I NEED HELP. My 6 year old son needs help”.

“My son was diagnosed with ADHD 10 months ago. He is not doing well in school. My wife is so stressed. Nobody sleeps in our house. My daughter is struggling from the lack of attention as we are all devoted to “fix my son”. The medical doctor suggested medication and I never liked that option but we started him just because we didn’t know what else to do. He is definitely more calm but seems depressed. My wife is even more worried now, I think she has anxiety. She complains of headaches every day but I know its all related to her worrying about our son. The school staff says he is not as hyperactive with the medication, but his grades are terrible, so not sure if he is understanding anything. CAN YOU HELP? CAN CHIROPRACTIC HELP?

SUCH DISSAPPOINTMENT i had.

Mr. P works in a brokerage office ONE block away from my wellness clinic.

ONE block away. (not a typo. Need to be redundant).

I see him at drop off almost everyday.

We have spoken in numerous occasions.

And his family has been struggling.

He came to me for back pain (the bread and butter pathology by which the  majority consult with a chiropractor).

And I have been just going about my own business, thinking I am trying to CHANGE peoples lives so every FAMILY in Chicago gets to THRIVE with abundant HEALTH and happiness.

But I am clearly not doing enough.

How was I his LAST resort, not his FIRST?

After I explained how chiropractic works by addressing the CA– USE of disease and how its all connected to the nervous system, and how we don’t concern ourselves with just covering the symptoms, he understood it all. It took me maybe 30 seconds for him to understand it ALL. Chiropractic is a matter of 60 seconds.

I am done talking about the weather.

I am done talking about the length of Mr. Trumps tie, or about his tanning habits.

Kids need me to be louder.

I am sorry Nico, Maia and Cami (my own kids) if I officially stop all nonsense talk at drop off in school, or at the park, on in the line of the grocery store.

I have a bigger mission than trying to be perceived as a “normal person”.

I must talk Chiropractic LOUDER so other Mr P’s that live ONE block away don’t have to go through months and years of agony.

I have one last thing to tell you:

You are a wonderful dad.

We will get your boy back.

I am confident of that.

And i am sorry that speaking of the weather was what I considered more important than speaking the TRUTH.

You are doing wonderful things for your family.

And in the end Mr P,

I have to be louder.